Aerostar 10 years around the world 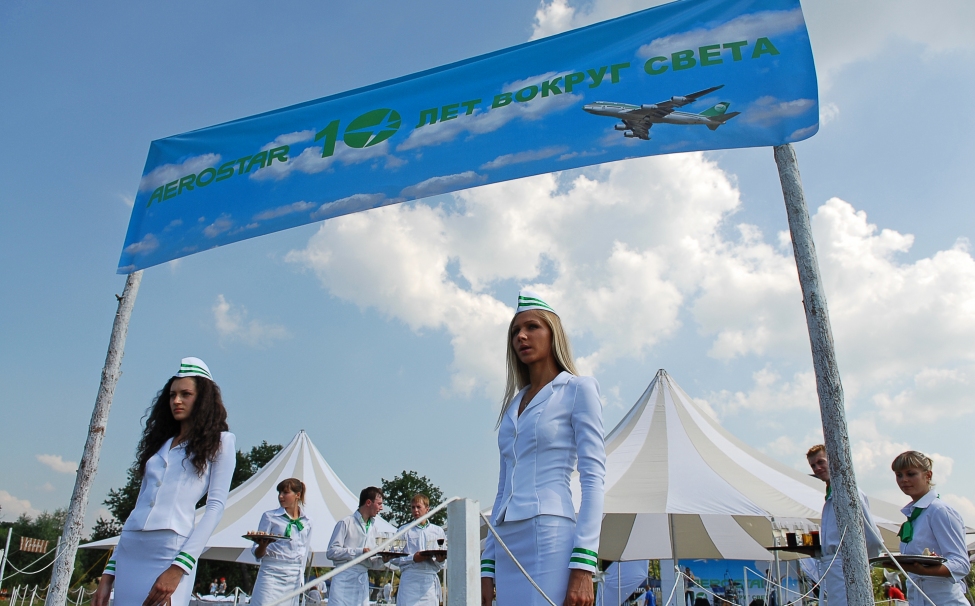 ‘Aerostar — 10 years around the world’ is the name of the event held by ‘Mainstream Communication & Consulting’ for 200 employees of Ukrainian Air Carrier ‘Aerostar’, which took place in Koncha Zaspa.

‘Mainstream’ got an assignment to organize and hold celebration of the 10th anniversary of ‘Aerostar’, and to team up people from remote offices. ‘Aerostar’ employees turned into real cosmopolitans and visited 10 countries of the world during the festival, as it was planned by organizers of the event.

‘Aerostar’ arranges world-wide express-conveyance, renders first-class services, provides safe flights and gives various emotions from visiting different corners of the planet to its client. But this time it was the employees’ turn to cast their daily cares aside and to assume the role of travelers at the corporate action!

Cosmopolitans were met on arrival by stewardesses — air hostesses, who helped them to take seats in the ‘plane’ (at the banquet-table), which could ferry all wishing persons in 10 directions. The entertainment program began right after the banquet and the captain’s opening statement (embodies by the Director of the company) and comprised different side-shows from different parts of the worlds: Scotland, Turkey, and Thailand, jungles of Africa, Ibiza, Wild West, China, Hawaii and Russia.

Our cosmopolitans went through the most fascinating and various impressions within the day! ‘Turkey’ welcomed the travelers with a tent with soft cushions, hookah and exotic dancers. The cosmopolitans had extraordinary feelings after massage and other relaxing procedures from ‘Thailand’. They got an opportunity to learn playing such an aristocratic game as golf in ‘Scotland’ or to ride horses in the zone of the ‘Wild West’. Our international travelers’ could play China’s games, go hunting in the ‘African jungles’, ride the quad bikes, dance to tipsy Latin-America rhythms etc. during this celebration.

Incidentally, where have the travelers come after this long journey? Of course, they came home, to their native Ukraine — with its sumptuous feasts, torrid dances and traditional hospitality.

Similar events are very important elements of internal corporate PR and contribute to cohesion of the company employees and establishment of friendly relations inside the company. Informal communication gave a chance to everyone to feel himself a part of a big and friendly team.

specializes in arrangement of charter and business flights, is a partner of the largest Ukrainian and foreign companies. More detailed information at www.aerostar.com.ua.